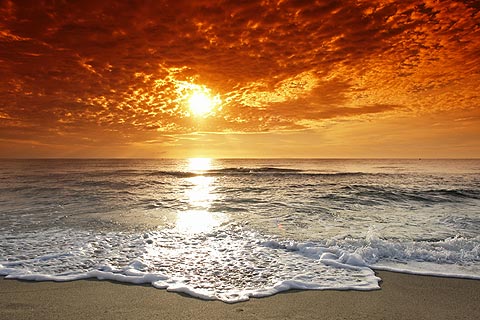 The climate in Corsica is generally one of hot, dry summers and mild, damp winters, but because the island is so mountainous the weather you can expect changes substantially with changes in altitude. Most visits to Corsica are more concerned with the towns and beaches along the coast than with the high mountains, and these areas tend to have quite consistent weather.

As you rise above 200 metres above sea level, the contrasts between summer and winter reduce, and above 1000 metres the weather is quite similar to northern Europe. Head to the mountain tops, and the weather is seldom very hot, and frequently cold and windy.

Storms are reasonably common in the summer, otherwise summers are usually dry. Fires are common because of the dryness and precautions to avoid starting these should be followed. Rain is much more common during the winter, but cold weather is unusual.

On balance, most of the year is a good time to visit Corsica, although the winters might be a little too damp at times, and the summers can be very hot if you are not looking to spend your visit on the beach.